Vows to end immigration cap, if he became PM 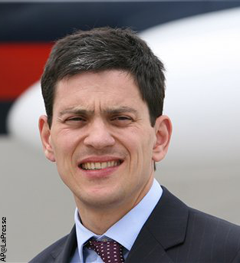 11 June 2010. Former Foreign Secretary David Miliband has vowed to fight Tory plans for an annual limit on immigration. In race to succeed, Miliband has also made clear his intention to do away with the measure if he ever becomes Prime Minister.

With this, rift has surfaced within the Labour Party over the issue of immigration. Only recently   leadership contender-cum-shadow cabinet minister Ed Balls claimed high levels of immigration under Labour affected the pay and conditions of "too many people".

Balls said the Government should have followed the precedent of most European partners. It should have restricted the rights to work and claim benefits of people from countries, such as Poland.

He even claimed Brown was told that his government was “making a mistake” by not talking about immigration.

He went up to the extent of commenting that the points-based system introduced by the previous government had no effect on EU immigration; and called for better protection for British workers under any future European Union expansion.

Meanwhile Miliband asserted that Britain was better place because of immigration. He added that if the annual cap on immigrants was high it was meaningless. On the other hand it would damage the economy if it was too low.

Miliband’s remarks came at the first hustings in the leadership contest on Wednesday night.