20th December 2010: Soon after the European Parliament approved a new anti-trafficking law, Anti-Slavery International has called on the British Government to adopt it. 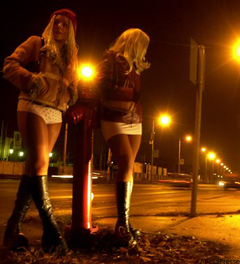 The development is significant as the law would result in stiffer penalties for traffickers and better protection for victims.

With the approval from the Parliament, it is already clear that traffickers in human beings are to face tougher penalties for their crime and victims. The new rules will apply to trafficking in the sex industry or labour exploitation in, for example, construction work, farming or domestic service.

With this legislation, "we will create a tougher environment for the human traffickers and stronger protection for the victims", said Civil Liberties Committee rapporteur Anna Hedh (S&D, SE).

"We also have to work on the roots of human trafficking, such as the demand for services. The human body is not a commodity that can be used and sold for money", she added.

"The biggest achievement is that this new directive creates a dissuasive environment for traffickers and ensures assistance and protection for victims of trafficking, especially for children. I am convinced that the result achieved is a good one and the adopted directive will create a better legal basis than the old 2002/629 Framework Decision. This is the first time we are making criminal law since the Lisbon Treaty", added Women’s Rights Committee rapporteur, Edit Bauer (EPP, SK).

Human beings are trafficked for many reasons. Sexual exploitation, forced labour, begging, removal of organs, illegal adoption and forced marriages are some examples covered by the new rules.

The directive takes a broader view of what "exploitation" means than does the EU framework decision of 2002 (which it is to replace), thus widening the protection to more victims.

The text agreed by Parliament and Council lays down minimum rules for defining criminal offences and sanctions for traffickers and introduces common rules to step up crime prevention and protection for victims. Once the directive is adopted, Member States will have two years to transpose it into their national laws.

The new directive sets maximum EU-wide penalties of at least five years’ imprisonment (i.e. Member States may not impose lower ceilings) or, in specific aggravating circumstances, ten years’ imprisonment. These aggravating circumstances include cases where children are exploited, criminal organisations are involved, the victim’s life is endangered or serious violence is used. Instigating, aiding, abetting or simply attempting to commit such an offence will also be punishable.

Where legal persons (organisations) are involved, sanctions should include criminal or non-criminal fines and could also include, for example, exclusion from entitlement to public benefits or permanent closure of establishments.

Member States should also ensure that the instruments and proceeds of these crimes are seized and confiscated. They are also “encouraged” to use them to support help and protection for victims, including compensation.

Victims should receive accommodation, material assistance and where necessary medical treatment, including psychological assistance. Legal counselling and legal representation should be free of charge, at least when the victim lacks sufficient financial resources. Victims of trafficking should also have access to witness protection programmes and to compensation schemes.

Assistance and support should be provided “before, during and for an appropriate time after criminal proceedings”, irrespective of a victim’s willingness to act as a witness. A requirement not to prosecute or impose penalties on victims is explicitly stated in the text.

To discourage demand, Member States should also “consider taking measures to establish as a criminal offence the use of services” of a victim, with the knowledge that he/she has been trafficked.

Several hundred thousand people are trafficked into or within the EU each year. Many victims are exploited for prostitution (43%, overwhelmingly women and girls), or for menial labour (32%).

The directive was approved with 643 votes in favour, 10 against and 14 abstentions. It will not apply to Denmark or the UK, but the latter may opt in later.

The UK Government previously stated that it was not willing to reconsider its decision to ‘opt out’ of the new trafficking legislation until it had been formally approved by the European Parliament.

Klara Skrivankova, Anti-Slavery International’s Trafficking Programme Co-ordinator, said: “To successfully combat trafficking the UK must recognise that it can not go it alone. Traffickers do not respect national borders, which is why it so important to strengthen the response to this crime across Europe. It is in the interests of the UK to adopt tougher legislation designed to give Britain the tools it needs to fight the trafficking of men, women and children into forced labour and sexual exploitation.”

‘Human Rights, Sex Work and The Challenge of Trafficking’, report by x:talk project