Currently, Nepalese veterans retired before 1997 could be deported 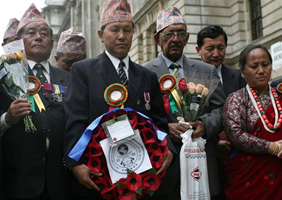 26 March 2009. The Home Secretary has agreed to announce a new policy on the right of Gurkhas to settle in Britain by the end of April, the High Court was told, as the Gurkhas returned to court to enforce a legal victory they won last September.

A High Court judge then ruled the Government’s existing immigration policy excluding them was unlawful.

Hundreds of Nepalese former soldiers have since staged repeated protests seeking an injunction obliging ministers to carry out the decision that approved extending the right to stay in Britain permanently to all Gurkha veterans.

Earlier, the Gurkhas’ lawyer Edward Fitzgerald, had told Mr Justice Blake that the two sides had reached agreement "on almost everything," and that Home Secretary Jacqui Smith would soon announce the new policy.

Scores of Gurkhas and their wives had come to court for the hearing and packed the public galleries.

Documents before the court described how many had died waiting for resolution of the case. The most recent was Rifleman Prem Bahadur Pun, who died on Sunday, March 15.

Campaigners, including actress Joanna Lumley, whose father fought with the Gurkhas in Burma during the Second World War, said the Government had "delayed and delayed" since the decision.

"We have always been clear that where there is a compelling case Gurkha soldiers and their families should be considered for settlement," a Home Office spokesman said in a statement.

"The revised guidance is currently under consideration and will be published by April 24.

"We are determined to get the guidance right to ensure that it is fair to all Gurkhas. This has involved consultation across government."

At the moment, only Gurkha soldiers who retired after 1997 — when their base was moved from Hong Kong to Britain — have the automatic right to stay permanently. Those who retired earlier must apply for settlement and thus could be deported.

The Home Office said the rule concerning the 1997 date was introduced because that was when the Gurkhas became a UK-based force, and its soldiers were likely to develop strong ties to Britain.

Around 3,500 Gurkhas currently serve in the British Army, including in Iraq and Afghanistan, where two of the Nepalese soldiers have died this month. They will need to serve the British army for 4 years before they can apply for settlement.