Disabled athlete being deported to Nigeria. Government refuses his plea for clemency. 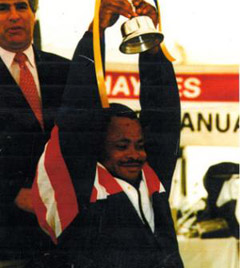 22 March 2010: He overcame his handicap to bring laurels to Britain. But, the disabled athlete is now being deported to Nigeria, with the Government refusing his plea for clemency.

Represented Britain at a paraplegic games in 1995, Vincent Onwubiko, 43, won five gold medals for Britain, even though he suffers from polio and is confined to a wheelchair

A power-lifter from Lewisham, south-east London, Onwubiko came to the UK in 1994 and has an 11-year-old daughter.

Onwubiko has also represented Britain at the Stoke Mandeville Games in 1995 and 1997. he again represented the country at the World Champion of Champions competition in Birmingham in 1996. Onwubiko was also selected for the GB team at the 1996 Paralympics in Atlanta, but could not make it.

Expressing apprehension he will be dead within weeks, if he is sent back to Nigeria, Onwubiko told The Independent the Government has given him three months of painkillers for his return to Nigeria and told him to get on with it. But he needs proper care. Sending him back is a death sentence.

Speaking from Colnbrook Immigration Removal Centre, Onwubiko said his legal case was still before the courts.

In 2007, Onwubiko was sentenced to five months in prison for driving, though he was disqualified after being convicted twice for careless driving in his specially adapted car, once after he jumped a red light.

An immigrant who commits a serious criminal offence Under UK law is subject to automatic deportation. At the end of his sentence, Onwubiko was taken to Dover Immigration Removal Centre.

According to Onwubiko, the centre did not admit him because he could not fully use his legs and was taken to Brixton prison in south London. He was granted bail in January 2008, but was re-arrested last August after being called in for an interview, and he has been in detention ever since.

Taking up his case this year MP Bridget Prentice sought UK Border Agency’, but was told the Home Office was committed to his deportation.

In a last ditch effort, Onwubiko has shot of a letter to Prime Minister Gordon Brown saying he was a polio victim from childhood. The malady affected both his legs, making it impossible for him to make use of them.

Seeking Brown’s intervention, he urged him by ask the Home Office to look into his case and release him, because British national athletes were not supposed to be in an immigration centre.

On the other hand, David Wood, Head of Criminality and Detentions, UKBA, said following a number of criminal convictions, Onwubiko was notified on 13 November 2007 of the decision to make a Deportation Order against him. Full consideration was given to his case and the decision was reviewed and upheld by an Immigration Judge.

His judicial review claim was found by the judge to be totally without merit – the UK Border Agency has not been presented with a European Court of Human Rights injunction preventing his removal and there are therefore no legal barriers to his removal from the UK.