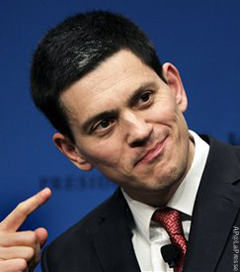 01 September 2010: After business houses and law firms, the new government’s move to place a cap on the number of immigrants has come under fire from Britain’s former foreign secretary David Miliband.

A frontrunner in the contest for being the leader of the opposition Labour party, Miliband has asserted that the British government plans to place the cap on non-European migrants coming to the UK are “stupid”.

Elaborating, he has asserted that the current migration was mainly fuelled by Europeans; and not non-European migrants.

Miliband said the idea to keep out of the country highly-skilled tax paying people was plain stupid. It was meaningless as either the reduction was so small, or it was dangerous. Either way was sending a very bad message,” Miliband said.

With this, it is clear that even after a defeat in the elections, the Labour leadership to a large extent has not changed its stand against cap on immigration.

Miliband told Indian newspaper Hindustan Times ahead of the September 25 leadership vote that Prime Minister David Cameron wants to build good relations with India. The decision is appreciable. But at the same time he has silly, dangerous and misguided immigration cap.

Asserting that the cap doesn’t fit,” Miliband asserted immigration was a real people’s issue. But above all, it was an intra-European Union issue. The A8 (eight East European countries that joined the EU in 2004) accession did cause difficulties.
The assertion comes soon after Shadow home secretary Alan Johnson lashed out at the government for its move to bring about immigration cap.

Johnson said the government’s recently announced ‘cap’ would affect less than a third of 1 per cent of those coming to “our shores.

As of now the Government is gearing up to implement the cap on the number of immigrants. It is insisting highly-paid professionals would not be affected by the ceiling.

Johnson insisted the points-based system “works” and the government “is foolish to pretend they can improve its effectiveness with an arbitrary cap."

The Chartered Institute of Personnel and Development also believes the sharp decline in the number of work-related visas showed the points-based system was "robust and working".

A further cap on net immigration would only leave many employers facing significant skills gap.

Already, voices can be heard loud and clear against the cap. The UK employers have joined forces against immigration cap, and even the law firms are with them. They are insisting it will prevent the City from flourishing.

The development is significant as the business lobby is building up its case in favour of having doors open for high-flyer staff, and is confident of winning, even as the government is carrying on with consultation on the issue.

The intense petitioning against the immigration cap is expected to show results soon. Following an unrelenting crusade from the CBI and other employer groups for Britain to keep the doors open to skilled overseas workers, the lobbying by anti-immigration groups may eventually see mediocre results.

The Law Society too has moved in claiming “legal work” will shift if outstanding workforce from other countries reaches Heathrow, only to be told they need to take a u turn.

The Labour Market Outlook report also says employers prefer migrants over the British workers to fill jobs, as they believe the standards are declining fast among graduates and school leavers.