"We do not define citizenship based on race or ethnicity" 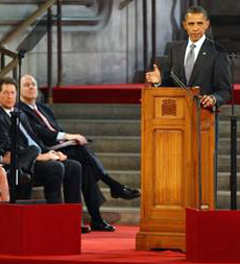 26 May 2011. Perhaps not one of his best speeches, some commentators may say, but we were nonetheless moved and inspired.

The grandson of a Kenyan who served as a cook in the British Army (and by the British colonial authorities was arrested and tortured in 1949) made us once again proud of the culture we have the privilege of belonging to, whether we were born here or not. A culture that the United Kingdom shares with the United States and that places the rights of individuals, the rule of law and the duty to fight for these values at the forefront of its identity.

Here is the excerpt of the speech that inspires us:

"There is one final quality that I believe makes the United States and the United Kingdom indispensable to this moment in history. And that is how we define ourselves as nations.

"Unlike most countries in the world, we do not define citizenship based on race or ethnicity. Being American or British is not about belonging to a certain group; it’s about believing in a certain set of ideals — the rights of individuals, the rule of law. That is why we hold incredible diversity within our borders. That’s why there are people around the world right now who believe that if they come to America, if they come to New York, if they come to London, if they work hard, they can pledge allegiance to our flag and call themselves Americans; if they come to England, they can make a new life for themselves and can sing God Save The Queen just like any other citizen.

"Yes, our diversity can lead to tension. And throughout our history there have been heated debates about immigration and assimilation in both of our countries. But even as these debates can be difficult, we fundamentally recognize that our patchwork heritage is an enormous strength — that in a world which will only grow smaller and more interconnected, the example of our two nations says it is possible for people to be united by their ideals, instead of divided by their differences; that it’s possible for hearts to change and old hatreds to pass; that it’s possible for the sons and daughters of former colonies to sit here as members of this great Parliament, and for the grandson of a Kenyan who served as a cook in the British Army to stand before you as President of the United States.

"That is what defines us. That is why the young men and women in the streets of Damascus and Cairo still reach for the rights our citizens enjoy, even if they sometimes differ with our policies. As two of the most powerful nations in the history of the world, we must always remember that the true source of our influence hasn’t just been the size of our economies, or the reach of our militaries, or the land that we’ve claimed. It has been the values that we must never waver in defending around the world – the idea that all beings are endowed by our Creator with certain rights that cannot be denied."

Read the transcript of the whole speech on newstatesman.com.