Romanian and Bulgarian advocacy groups have decided to take their people to the streets to protest against the discriminatory policies carried out by the UK government against their communities. 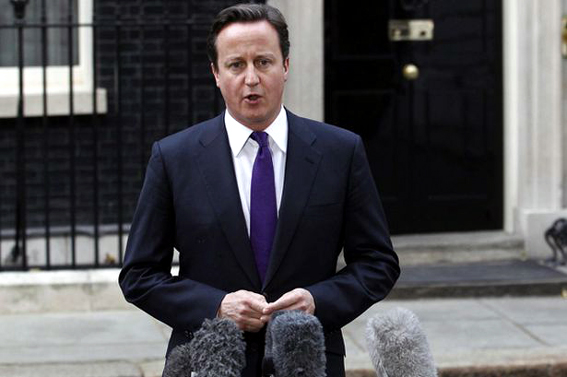 The protest will take place in London on Monday, December 9, at 13.00, at the residence of Prime Minister David Cameron in 10 Downing Street.

The date of the protest is not accidental, as between 9 and 12 December Mr. Cameron will be in Strasbourg, where he will pursue restrictions to the right to free movement within the EU for citizens of the poorer countries of the Union.

Organizers say they count on the participation of thousands of people, who ask not to be denied their rights as citizens of the European Union.

In an interview to the Romanian UK weekly “Ziarul Romanesc”, Paul Suciu, financial reviewer and one of the organizers, said: "Discrimination is manifested at some levels of British society, not only through a partisan political rhetoric in search of political capital, but also by government policy of systematic denial of the rights agreed upon within the European Union framework, which clearly establishes equality of rights for Romanian and Bulgarian citizens in Great Britain."

A. DENYING THE RIGHT TO EDUCATION

This initial period started in 2010 when the student sponsorship system changed, from a partly government sponsored fee of around £3000 to a full tuition fee of £9000, covered through government sponsored loans. The recruitment trend amongst universities was being shifted to international students, which paid £9000+ a year in fees, avoiding the poorer areas of Eastern Europe (promoting a Union where the best, but poor are being denied the best opportunities).

The new £9000+ fees became in a de facto barrier to all Eastern Europeans and the highly ambitious and upwardly mobile Romanians and Bulgarians found themselves simply unable to sustain themselves in the UK higher education system, based solely on the measly 20 hours a week allowance for part-time work imposed by the British state (yet another covert way of protecting the local work market against other Eastern Europeans).

The lifting of barriers from the 1st of January will do little to change this situation, as to be able to access the local maintenance and study grants, people will have to prove a period of residence, currently a minimum of three years, which under the conditions of a very competitive work market, could mean the permanent relegation of new comers to low skilled jobs and an under cycling of sometimes very capable individuals.

2. Delaying and complicating the application procedures for study, maintenance and research

b) The application for maintenance loans was delayed on the same grounds, plus on the incertitude surrounding the three year residence criteria.

c) The application for research grants, especially those EU funded and concerning specifically the Romanian/ Bulgarian communities, was delayed on the same grounds, plus the preferential and non-transparent way these funds were given to applicants.

a) The unilateral stop of funds without consulting or even informing those affected, left members of the Romanian and Bulgarian communities not only without the ability to pay for their studies, but also for their maintenance (as many had given up full-time jobs to engage in study). Money was withdrawn from their bank accounts (through the cooperation of financial institutions) affecting rents, housing, food and basic necessities. In the case of those with dependents, the effects of such a policy in the cold months are unknown.

b) No legal support was given at any time to those affected and no explanations were provided, on hidden contractual clauses that state that even if funding is withdrawn on a temporary basis, if one doesn’t attend course he/she will lose financing by default.

c) A campaign of incertitude and intimidation was followed through the criminalization of those that accessed these funds, by calling them “benefit scroungers” and “fraudsters”.

Even though the UK had the right to restrict access to the labour market until 01 January 2014, the governmental interpretation of EU legislation and its application created a situation of abuse and discrimination, in support of the partisan politics, followed at the highest level, for the following categories:

The effective times of application processing for work documentation were 6-12 months. Masters Programs only being a year in length, this meant that graduate students were actually receiving their first Yellow card and NINO at the end of their studies, when they no longer needed them. The 20 work hours a week limitation was also rather arbitrary, in the context of tuition and maintenance fees increasing in the wake of the 2008 crisis.

Since 2007, revealed Greg Hands, MP for Chelsea and Fulham, the UK government used unclear principles to identify and tackle illegal work and moreover was fining only the employees (with the standard 1000 pounds fine) and not the employer (with the 5000 pounds one). This and the bureaucratic burden placed on companies that legally hired Romanians and Bulgarians adds to the general belief that there is a concerted campaign to keep the Romanian and Bulgarian communities in low-skilled/low wage jobs.

The UK refuses to follow the EU directive 2004/38/EC concerning migrant worker rights, which allows intra-EU migrants to avoid any residency requirement and enjoy full legal rights as soon as thy have arrived.

1) The British state has treated Romanians and Bulgarians with hostility in the process of attaining their rights (according to local and EU legislation). They were treated as a burden and upon entering in good faith contracts with the stronger English side, erroneous information was many times communicated (such as the incorrect fact that Romanians and Bulgarian Students cannot apply for maintenance grants, erroneously stated in bold on the Student Loans Company website).

2 ) The criminalization of Romanians who tried to legally access these rights, through a continuous campaign of discrimination and humiliation, reached the highest level of British politics, with Prime Minister David Cameron’s recent speech. The Romanian and Bulgarian communities, which based on Home Office statistics, is constituted mostly of young, ambitious and child-less individuals, was accused of benefits tourism. A media campaign was undertaken against our communities by the Home Office through tactics the UKIP leader, Nigel Farage described as Un-British (the Go Home Campaign, vans and leaflets and a tabloid campaign). 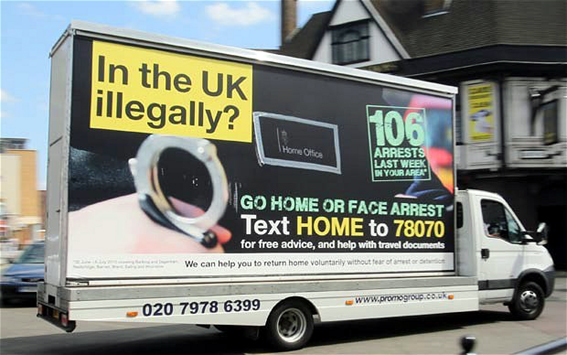 1) Through retaining original copies of EU travel documents (passport, identity card) for up to 12 months and a lack of accountancy in case of loss.

2) Through promoting at the level of public debate the expulsion of some of the most vulnerable and poor categories of EU citizens, coming from Romania/Bulgaria. This was done through positive incentives (paying people to leave) and through negative pressure (Go Home Campaign, tabloid campaign and now the pursuing of such policies at a legislative EU level).

E. BREACHING THE RIGHT TO ASSOCIATION

1) By throwing a shadow over the whole Romanian and Bulgarian communities, making people ashamed of who they are, through public declarations and media sponsored campaigns that use words such as “disease”, “eyesore”, etc.

2) Through political and financial pressure at the level of higher education institutions to prevent the formal organization of protests even though their business model is being attacked and their very existence jeopardized, with the unilateral freeze of student loans.

1) Romanians/ Bulgarians were not informed that according to EU legislation they could refuse to provide certain sensitive documentation, such as bank statements which contain private life details (purchase history, etc., sensitive in the context of purchasing sexual and religious items, etc.) and could instead opt for personal statements of income.