The retired teacher is often referred to as anti-Islamic activist 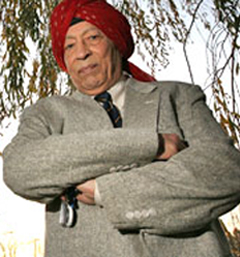 15 February 2010: With the British national Party opening gates to non-whites, a 78-year-old Sikh and a retired teacher Rajinder Singh is all set to become first non-white member.


Rajinder Singh, who once appeared on the BNP’s internet TV channel, is the party’s obvious choice.

The elderly Sikh is known to blame the Muslims for his father’s death; and is often referred to as an anti-Islamic activist. Rajinder Singh has been claiming Islam is based on “deception, fraud and surprise attack”; and has lent his support to the far-right party for the last decade.

Rajinder Singh was born in Lahore, Pakistan, but fled communal tensions and came to Britain in 1967.

A former teacher from Wellingborough, Northamptonshire, he has all along believed the BNP can be persuaded to accept Sikhs as British.

BNP’s John Walker had earlier asserted Rajinder Singh was the ideal first non-white candidate to join the party, as he has been supportive of the party for years; he was in Britain, and fully accepted the membership criteria.


Party leader Nick Griffin too said: “In fact, when I announced that I personally would welcome the brave Mr Rajinder Singh as a member in the light of his struggle against the Islamification of Britain, I was warmly applauded by the crowd.”