"Newcomers require documents that are almost impossible to obtain."

14 September 2011. Lately, many applications by Romanians for a national insurance number (NINO), without which they cannot work legally in Britain, have been denied. At interviews at the employment offices their documents have been rejected; some of them were denied their right to the scheduled interviews under various pretexts. The situation is critical, say several people who work with Romanians.

Daniela Raileanu, owner of Efficient Books, an accounting firm in London, lists among its services help in getting Nino. She is on the frontline in this struggle: "Many Romanians were denied an interview, and some have not even got one scheduled. I spent a lot of talking with officials from the Job Centre, I spoke with a manager there and tried to find out what's going on, but there still are many Romanian refused.

Raileanu Daniela says that even if you don't succeed in getting an appointment, you're not sure to get Nino. "Those who process applications do not verify documents properly: some are refused even if they have all the necessary documents – letters from accounting, letters of recommendation, service contracts, all the files you need to prove that you have started a self-employed activity. I know a Romanian who has been turned back four times by now."

There are all sorts of arbitrary reasons for this, for example that the applicant does not have a landline on the documents, if invoices and contracts have only a cell number. "They consider it very important to have a landline on invoices or contracts, where they can call for verification, because Job Centre can't call mobiles. But even if someone had a landline at home, they might not answer, as few stay home all day waiting for phone calls from Job Centre.

"But what shocked us most was the problem with the yellow cards and blue cards required to schedule interviews. There were instances in which they were asked to register as self-employed prior to obtaining Nino, even if the procedure was changed last year so that first you must obtain Nino, then register with the tax office. Some Romanian women who wanted to open a limited company were told they had no right to open a business in the UK and were not allocated a Nino. Newcomers require documents that are almost impossible to obtain. "

The situation worsened in August last year, but that does not mean that all applications were denied: "We have many customers who have managed to get Nino. There are many coming on their own and being refused. It is very important to present a letter from an accountant. "

WHAT DOES THE EMBASSY DO? 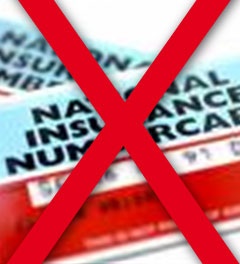 Remus Robu, a Romanian lawyer from Levenes receives many calls from Romanians denied a Nino, although the company he works for focuses on other legal areas (mainly accident claims). Out of despair, Romanians call anyone they think can help them: "Some of those who were refused were telling me that they were not asked the questions they expected, such as where were they working, since when were they working, what they were doing. Even if they had some evidence – letters, invoices – it seems that they were not taken into account – in my opinion they were deliberately ignored. "

Remus Robu says that fundamental rights of the Accession Treaty of Romania to the EU are violated by the British government, when it doesn't assign National Insurance Numbers.

"We know too well that Romanians have the right, based on European treaties, to work as self employed, and Member States are required to facilitate and make procedures transparent. They are not allowed to put restrictions on what activities Romanians can carry out as self-employed, as that would be against free competition. Romanians have the right to move freely and do business here, and the procedure for establishing a company should be easy and transparent, without the state to hinder it directly or indirectly. When they refuse applications for Nino, I see it as an indirect obstacle to the establishment of a European company and a violation of the Treaty. Government cannot compel a person to work part time or full time, or to earn a certain level of income. "

What to do? "I think the Embassy of Romania should contact the Ministry of Labour and ask for an explanation and let us know and us what is going on. The Romanian community expects help from its embassy. It is one of its obligations as an institution, as a representative of our country here. It is useless for those who are representing so-called community interests to go and try to talk themselves as I don't know with whom they could talk and what they could achieve. This only can be solved at the diplomatic level. "

Self-employed: rules to work in the UK for Bulgarians and Romanians

How to apply for National Insurance

National Insurance Contributions: a guide for 2011/2012

A guide to being self employed – tax and benefits