21st September 2011: Amnesty International has released a report attacking the failure of most EU countries to offer relocation to those living in bleak conditions on the Egyptian and Tunisian frontiers with Libya. 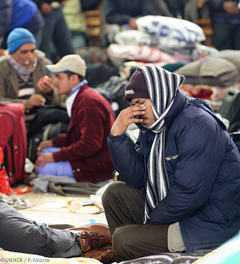 It has insisted European states providing military support, to participants of war in Libya, to propose a lifeline to the thousands of refugees who have been made homeless by the ongoing war.

The group has pointed out that Australia, Canada and the US had offered to shift some refugees – but in Europe only Norway and seven EU states have offered help, and to less than 700 refugees.

The seven do not include Britain or France, which led calls for NATO to intervene in the country.

As per Morning Star the Amnesty’s European Institutions Office director Nicolas Berger said that they have seen a terrible reaction to the troubles of displaced refugees on Europe’s doorstep.

Berger added that this was particularly glaring given that some European countries, by participating in NATO operations in Libya, had been party to the very disagreement that has been one of the main causes of the forced movement of people.

Berger insisted the issue should be on the agenda for talks between EU home affairs ministers due to start tomorrow.

But at previous talks on the mass refugee migration Britain and France remained adamant that the problem remained a matter for the country of entry.

Officials still claim that the scale of immigration resulting from disorder in Libya and elsewhere in the Middle East can be managed under existing rules.

Based on visits to the Choucha refugee camp in Tunisia and the Salloum Border Post in Egypt in June and July, Amnesty evaluates that around 5,000 refugees who would face harassment or conflict if returned to their own countries were now in midpoint.

A spokesman for Britain’s Department for International Development said that they were committed to their obligations under the 1951 Refugee Convention. The spokesman asserted that they were under under no international obligation to bring asylum-seekers or refugees to the UK from Libya. They also did not believe it would be desirable to do so.

Spokesman added that in their view humanitarian and refugee issues were best dealt with in the region of origin, or by asylum-seekers claiming protection in the first safe country they reach.