22nd June 2010: Just over three months after refugees in Bosnia received support from celebrity couple Angelina Jolie and Brad Pitt, Jolie is on the job again. 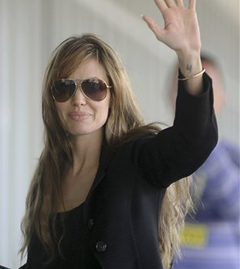 For underscoring the abuses suffered by women and children refugees, Jolie traveled jungle roads to a village on Ecuador’s border with Colombia

A United Nations human rights goodwill ambassador, Jolie trekked down to remote border hamlet of Barranca Bermeja and she met a woman who had lost two children in Colombia’s internal conflict. During her visit, many more narrated their tragic stories through interpreters.

As of now more than 50,000 Colombian refugees are registered in Ecuador, but estimates suggest more than 170,000 are there.