21st January 2011: A top official of United Nations High Commissioner for Refugees (UNHCR) has raised questions on the approach adopted by some European countries people escaping from unsystematic effect of generalized violence in countries like Afghanistan, Iraq and Somalia. 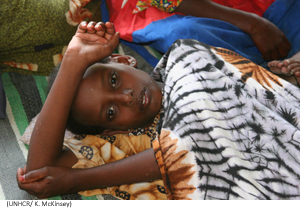 The assertion came at a forum organized in Brussels on Tuesday to launch UNHCR’s Commemorations Year in Europe.

Türk was of the view some asylum states maintain people fleeing conflict or large-scale violence cannot qualify as refugees.

Türk insisted this in his opinion went against the spirit of the 1951 UN Refugee Convention.

Elaborating, he said "protecting refugees is what the Convention is made for."

Addressing on the issue of protection gaps in Europe, Türk said there has been debate in the European Union (EU) in the 1980s and 1990s about the non-state agent of persecution issue, with some countries arguing that persecution coming from non-state agents was not sufficient to merit granting refugee status.

That debate was resolved by the adoption of the so-called EU Qualification Directive, which favoured a broader interpretation of persecution.

Article 15c of the document extends subsidiary protection to civilians who would face a risk of serious harm in a situation of indiscriminate violence if sent home. But this provision is couched in what Türk called the "convoluted language of political compromise" and, as a result, it remains little utilized.

Türk pointed out that despite the EU Qualification Directive, some European countries still send people back to areas marked by generalized violence such as Afghanistan, where the fluid and volatile nature of conflict and the worsening situation had led to an increased number of civilian casualties, more frequent security incidents and significant population displacement.

While Europe was getting lost in sophisticated discussions about legal concepts, Turk said, Asian and African countries were taking in victims of generalized violence in large numbers. He cited the example of Syria taking in Iraqis, Pakistan accepting Afghans and Kenya providing a safe haven for Somalis. Legal debates should not eclipse the "protection imperative," he said.

Türk revealed UNHCR researchers examining adherence to the Directive had so far found "an exceedingly narrow interpretation, one which would defy common sense in many cases." He added that Article 15c was used in such a small number of cases that it risked being "an empty shell in protection terms."

This seemed to be due to narrow approaches adopted for the interpretation of words such as "serious harm," "civilian" and "indiscriminate" and the degree of individual targeting, among others. In many cases, although people are not recognized as refugees nor granted subsidiary protection, they are protected from return by a variety of disparate national statuses, but without a consistent set of rights.