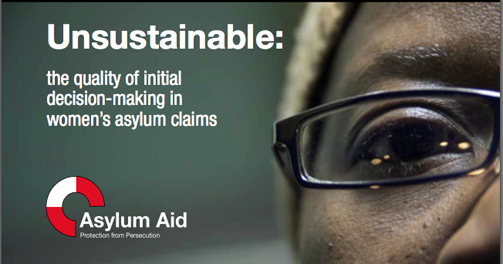 20 January 2011: Women asylum seekers are most of the time victims of wrong decisions made by the UK Border Agency (UKBA) staff, a new research by Asylum Aid has revealed.

The research titled “Unsustainable” examined the quality of initial decisions made by the UKBA when women claim asylum since the introduction of the New Asylum Model in 2007.

It emerged that the UKBA consistently makes wrong decisions for women seeking asylum, which then have to be corrected by immigration judges.

Asylum Aid said that majority of women in their research were simply not believed. The UKBA initially refused 87% of the cases studied because they didn’t accept the credibility of their asylum claim.

However, 42% of these decisions were overturned on appeal, far above the average for all asylum cases (which stands at just 28%).

The research also revealed that the UKBA does not adequately consider the legal entitlement to protection provided to victims of gender-related persecution under the Refugee Convention.

It also emerged that case owners do not consider issues at the heart of gender-related persecution. The UKBA case owners at times displayed a striking failure to understand the nature of the persecution from which women might flee. This poor understanding led to case owners doubting the credibility of applicant’s accounts for no good reason.

For example, a woman whose passport had been confiscated by her husband, and from whom she had been subjected to threats, abuse and humiliation – was informed by the UKBA that she was not considered a victim of domestic violence because her husband had only tried to hit her once.

The UKBA also used the Country of Origin Information (COI) and case law selectively or unrepresentatively in support of negative decisions. For example, one decision-maker relied upon an article from the American gossip website www.gawker.com when refusing an application from a lesbian who feared the death penalty if returned to Uganda. No reference was made to the COI report detailing persecution of gay people in Uganda.

Asylum Aid research also revealed that measures introduced by the UKBA to improve the handling of asylum claims have not been adequately implemented.

The ‘single case owner’ model promised that a single UKBA case owner would be responsible for an asylum claim from the interview to either removal or integration. The continuity built into this had clear benefits for women seeking asylum, as it would help develop the trust necessary for the disclosure of distressing details. However, the case owner changed at least once for the majority of the women in the study’s sample.

Another problem faced by women seeking asylum is a desperate lack of legal representation.

The report urges the UKBA to ensure that case owners question asylum applicants appropriately, both through the nature and phrasing of questions and through their tone and attitude.

The case owners are advised to understand how trauma affects memory and concentration and to interpret and apply the Refugee Convention appropriately in relation to gender.

They are also advised to identify and apply appropriately the ground of membership of a Particular Social Group and at the same time to interpret and use appropriately case law relevant to gender.

The case owners are also advised to seek out and apply appropriately Country of Origin Information on gender related issues. They should also take gender persecution, discrimination, cultural issues and economic issues into account when considering the reasonableness of internal flight alternative, the report recommends.

The UKBA is urged to ensure the single case owner model is implemented from the first reporting event until the decision is made, and to guarantee that women asylum applicants are provided with female case owners and interpreters at interview.

The report also urges the Legal Services Commission to guarantee access to free competent legal advice and representation to all asylum seekers in advance of their initial asylum interview. It is also urged to revise the graduated fee scheme to ensure that it encourages good quality representation and does not act as a disincentive in complex cases.

by Stephen Ogongo
The Afronews