Thumping beats of drums fill the air, as a delegation of Sikhs joins in


9th February 2011: The thumping beats of drums filled the air, as a delegation of proudly marching Sikhs joined a big rally against the English Defence League (EDL) in Luton on Saturday, 5 February. 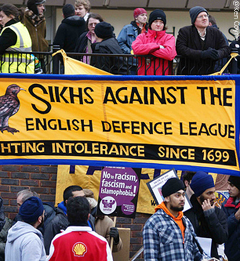 The EDL is in line of fire, with some of the largest Sikh and Hindu organisations condemning it. Joining them in the condemnation are also Sikh students in the UK.
The EDL has been blamed for organising events across the country, in the process stirring up hatred, Islamophobia and racism.

The EDL has also been accused of provoking violent attacks on Muslim, black and Asian communities.

As the Sikhs marches, they played the dhol or the Punjabi drum while joining the rally carrying a banner ‘Sikhs Against the English Defence League – Fighting Intolerance since 1699’.

The reference is to the establishment of martial Sikhism by the 10th Guru of the Sikhs, Guru Gobind Singh Ji.

More than two thousand demonstrators gathered in the Park Square, in the centre of Luton, greeted the marching Sikhs with cheer and a great applause.

The development is significant, as the response is being seen as a blow to EDL, which has been claiming support from many Sikhs.

The Sikhs also raised slogans against Guramit Singh, an EDL leader. Speaking on behalf of the Sikh delegation, Varinder Singh said the Sikh community has a proud tradition of fighting fascism in the Second World War. “Given our proud history, how can Sikhs not oppose the racism and fascism espoused by EDL?” he questioned.

In a joint statement earlier issued by Sikh and Hindu organisations, it has been stated: “We, the undersigned, are deeply concerned by the rise in fascism, Islamophobia, anti-semitism and racism. The English Defence League (EDL) has organised events across the country, stirring up hatred, Islamophobia and racism – running riot in some cases and provoking violent attacks on Muslim, black and Asian communities and on Mosques and Mandirs (Hindu temples)”.

The statement adds: “They are using the old tactics of ‘divide and rule’ and are trying to divide the Asians by isolating the Muslim community. Furthermore, some misguided Sikh youth are letting themselves to be used by the EDL, while a Sikh man has disgracefully joined the BNP. These people are helping to spread mistrust within our communities and we whole heartedly condemn their actions”.