18th March 2011: Screws, nails and an abusive note in the driveway — this is what the residents of a Travellers’ site on the outskirts of Norwich found. 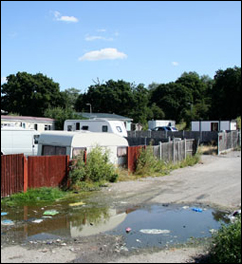 In what is being perceived as a racist attack, anywhere between 2,000 and 2,500 nails and screws were scattered across the driveway.

Site manager of the Roundwell Travellers’ site off Dereham Road in Costessey, Rebecca Gallagher says she along with her family have been living on the site for seven years without any trouble. But, they were shocked when her husband discovered the stuff after finding a nail in the jeep tyre.

Putting up with her husband and three children, Gallagher says her spouse had taken the kids to school. Upon return, he realised a nail in the tyre of his jeep. As he went to check the source, he found approximately 2,000-2,500 nails and screws scattered across the driveway.

This was not all. An abusive note was also found calling them ‘pikies’. It was followed by a swear word.

Gallagher says they were really upset particularly as it was apparent the attackers wanted them to know the operation was targeted at them and was racially motivated.

The attack could have been fallout of an earlier assertion Gallagher made. She had told the Evening News about struggle Gypsy groups encounter as mainstream society often fails to understand their culture.

Gallagher says until the nailing down operation the family had never had any problems with crime.

She adds people in the village and the shops nearby are affectionate and very understanding; and they have been lucky. But the incident obviously shows prejudice still exists.

Describing the attack as unacceptable, Gallagher expressed hope the attackers will be caught so that it does not happen again.

The Norfolk police has confirmed they are investigating the reports of a racially motivated attack at the Roundwell site.