28th February 2011: Anti-Muslim sentiments continue to be on a higher side in the UK. 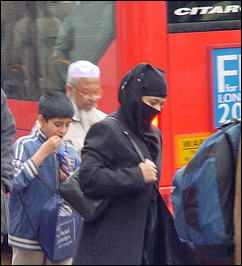 A survey has found nothing less than 52 per cent of the people interviewed agreed ‘Muslims create problems in the UK’.

The report, `Fear and Hope: The New Politics of Identity’, comes at a time when Labour is under criticism for its open door policy of letting in the immigrants.

The poll, considered one of the largest studies on the subject, was conducted by Populus. The findings are based on 91 questions to more than 5,000 individuals.

The report assumes significance as more than a quarter of all new immigrants to the U.K. in 2010 were estimated to be Muslim.

The findings come at a time when anti-Muslim hate crime is widespread; and it is believed the community faces a risk of aggression and coercion not only from politically-motivated attackers and gangs, but also individuals not aligned to extremist groups.

A research by the Institute of Race Relations had earlier also ‘exposed the reach of racial violence that continues to spread across the county’.

Random street attacks by gangs of youths; attacks on workers in isolated jobs, such as taxi drivers, takeaway and restaurant owners, and railway staff; alcohol-fuelled racist abuse; arson attacks and cases of graffiti and vandalism — all figured in a list of `some of the most serious cases of abuse and physical violence’ between January and June 2010.


Attacks on Muslims and vandalism in and around mosques also featured highly on the list.

Another report also indicated anti-Muslim hate crime is widespread. The community faces a risk of aggression and coercion not only from politically-motivated attackers and gangs, but also individuals not aligned to extremist groups.

The areas of concern brought out in the report authored by Robert Lambert and Jonathan Githens-Mazer are: Mosques in isolated communities are vulnerable to attack; abuse of and assaults on women have increased; street violence is prevalent; demonstrations by the EDL spread fear and anxiety; and there is serious under-reporting of violent attacks by victims.

The report goes on to examine the demonisation in the media of Muslim leaders, what it terms ‘institutional Islamophobia’, and political discrimination against Muslim organisations.

The Home Office too has funded a project asking teachers and community leaders to identify children talking about violence — Muslim teenagers included. The project now is to be re-evaluated.
.
The £12.5m counter terrorism programme encouraged teachers and community leaders to identify and also report Muslim teenagers and others they suspected were facing the risk of getting involved with extremists.

They were asked to spot individuals, who had not committed any criminal offence, but were logging on to terrorist websites or were often talking about taking part in violent activity.