Half as many asylum applications than in 2011; figures decrease in all regions 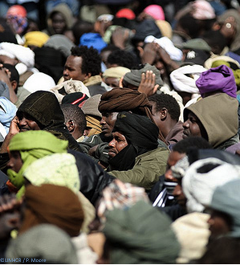 28 March 2011. The number of refuges seeking asylum in the industrialized world has plummeted over the last 10 years, revealed the UN High Commission for Refugees (UNHCR) in its latest report on asylum trends.

A total of 358,800 asylum applications were lodged in industrialized countries in 2010, which was 5% fewer than the previous year and almost half (42 per cent) than the peak in 2001.

"The global dynamics of asylum are changing. Asylum claims in the industrialized world are much lower than a decade ago while year-on-year levels are up in only a handful of countries," said the UN High Commissioner for Refugees António Guterres.

The numbers fell in most regions, including Europe, North America and North Asia. 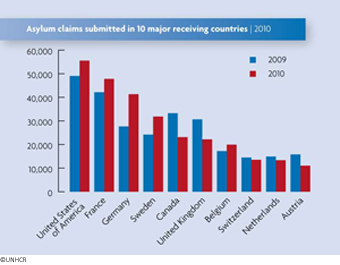 Among the top 10 receiving countries, only United States, France, Germany and Sweden saw an increase in year-on levels.

In the European area, Southern Europe interestingly saw the largest decline (-33% from 2009), mainly because fewer people requested protection in Malta, Italy and Greece.

"We need to study the root causes to see if the decline is because of fewer push factors in areas of origin, or tighter migration control in countries of asylum," commented High Commissioner Guterres.

The top five asylum receiving countries in 2010 were: the United States, France, Germany, Sweden and Canada. Together, they accounted for more than half (56 per cent) of all asylum applications covered in the report.

The US was the largest recipient country, with 6,500 new applications. The 13% increase from 2009 was partly due to a rise in the number of Chinese and Mexican asylum-seekers.

France maintained its second-place position with 47,800 new applications, largely from Serbian, Russian and Congolese asylum-seekers, followed by Germany with 41,330.

Both these countries saw an increase in applications partly due to a rise in asylum-seekers from Serbia and the former Yugoslav Republic of Macedonia. This development was widely attributed to the introduction of visa-free entry to the European Union for nationals of these two countries since December 2009.

Serbia (including Kosovo) was the main source of asylum-seekers last year. It was responsible for 28,900 applications, an increase of 54 % compared to the previous year, when the country ranked sixth. Interestingly, the number of asylum applications in 2010 was comparable to 2001, soon after the Kosovo crisis.

Afghanistan slid to second place with a decrease of 9 % compared to the previous year.

Chinese asylum-seekers made up the third-largest asylum group in 2010, partly due to a substantial drop in the number of new applications from Iraq and Somalia.

For the first time since 2005, Iraq was not one of the top two countries of origin of asylum-seekers. It dropped to fourth place, followed by the Russian Federation. Somalia, which was ranked third in 2009, fell to sixth place in 2010.

If asylum application are lodged in the West, the brunt of hosting refugees in times of political, economic and social upheaval is mainly borne by developing countries.

The report figures should be seen in the context of recent emergencies in Côte d’Ivoire and Libya, noted High Commissioner Guterres.

"Overall, it’s still the developing world that is carrying the lion’s share of responsibility for hosting refugees," he said. "Despite their many other challenges, countries like Liberia, Tunisia and Egypt have kept their borders open to people in need. I call upon all countries to support them."