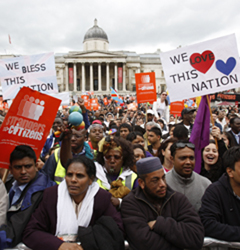 14th June 2011: The UK is the continent’s most open-to-immigrants county.

A research conducted by the EU statistics body –Eurostat — says nothing less than 204,000 foreign nationals were granted awarded British citizenship in 2009.

Statistically speaking, the passports were handed out at the rate of almost two in every five minutes. With this, UK grabbed the first position, with 50 per cent more than second-placed France. It was more than double the number in Germany.

The statistics also led Eurostat to come out with the prediction that Britain could become the most populated EU country by 2060 with 79 million people.

Reacting to the data, the critics claimed the statistics went a long way to show that Britain’s borders had been left wide open.