11th April 2011: The UK Border Agency’s e-Borders monitoring system has helped capture suspects linked to hundreds of crimes while trying to cross the UK border, the Agency has said.

In 2010/11 e-Borders alerts led to 2,800 arrests after the details of 126 million passengers were checked against ‘watchlists’ of suspects wanted by the UK Border Agency, police, SOCA and HM Revenue & Customs.

Currently the e-Borders system checks 90 per cent of flights from outside the EU and up to 60 per cent of those from within the EU to combat terrorist threats, spot organised criminals, stop immigration abuse and catch fugitives from justice.

And since 2005 it has also helped seize half a tonne of drugs, five tonnes of loose tobacco and nearly seven million cigarettes. 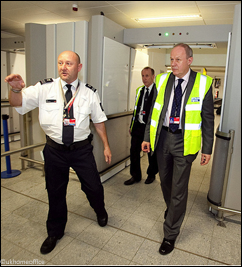 Visiting the National Border Targeting Centre (NBTC) in Manchester, Immigration Minister Damian Green said: “Checking people coming to the UK is vital in helping secure the border by targeting known criminals, terror suspects and illegal migrants while gathering evidence against smugglers and people traffickers. Traveller information has enabled the e-Borders to help keep our country safe with more than 8,400 criminals, including rapists and murderers, intercepted since it was established.

“When the new National Crime Agency goes live from 2013 the Manchester based NBTC will be central to helping the UK Border Agency play its part. The city can be justly proud of its role at the forefront of the hi-tech fight to make the country’s border even more secure.”

The hi-tech system is operated by the Manchester based NBTC which electronically sifts information on passengers and crew before they even set foot on a plane. Operators in the control room check personal details against ‘watch lists’ and provide details to UK Border Agency officers about individuals wanted by law enforcement agencies.

The role of the e-Borders system continues to grow as the details of more individuals travelling to and from the UK are checked against lists of people wanted by the police or thought to pose a threat. And when the new National Crime Agency goes live from 2013 Manchester will be central to the new Border Police Command’s role of providing a single assessment of border related risks.

Details given when flights are booked help the NBTC stop threats to the UK and keep it safe.